I first went to Azania House (formerly known as Bremner Building) at the University of Cape Town (UCT), on the Saturday after the first night of the occupation. The energy was amazing, the discussions were vibrant, and at the time I wasn’t sure if the Rhodes statue would ultimately fall or not. I was just excited to be in the presence of black students who are fighting for transformation at the university. I was excited to see students demanding to see themselves represented at this African university.

On my next visit to Bremner I witnessed a heated discussion on the issue of Gender Neutral bathrooms on the first floor because there are transgendered students in the #RhodesMustFall movement. One of the transgendered persons in the room suggested that the female and male bathrooms on the first floor should be made Gender Neutral. Others met this request with resistance for a number of reasons. The cis gender woman mentioned reasons of safety that they do not want to go into a bathroom where males can also go. One of the guys sheepishly voiced not wanting transgendered women entering the male bathroom.

The transgendered person in the conversation tried to explain that they also feel uncomfortable going into male or female bathrooms. Male bathrooms are often hostile and you are treated like someone who is there as a voyeur on male penises. The trans person also voiced that female bathrooms are also filled with cold stares and judgements and sometimes-verbal abuse.

While listening to this conversation I couldn’t help but think of how Simon Nkoli conscientised some of his comrades about homosexuality while they were arrested in the Delmas Treason Trial in the 1980’s. Simon Nkoli’s fellow comrades in the treason trial often spoke about Simon Nkoli with affection and how they learned about gay and lesbian rights from him. The transgendered person in the conversation at Azania House was conscientising fellow comrades on transgendered issues and I was moved by this interaction. It was a real and honest moment and although these students had different opinions and feelings about Gender Neutral bathrooms, it was an open discussion; it was on the table and the students were grappling.

In the end the students decided to stick paper signs designating the first floor male and female bathrooms Gender Neutral? and Gender Neutral. What I saw was the first of many discussion that I would witness about transgendered issues in Azania House and in the #RhodesMustFall movements as a whole. In the following weeks during the occupation of the Archie Mafeje room the politics of gender, sexuality, and transgendered also became central as intersectionality as a framework took shape within the movement. 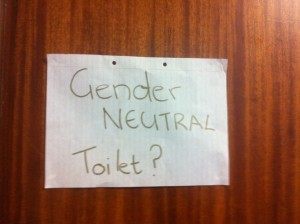 The #RhodesMustFall movement has adopted Steve Biko’s Black Consciousness as the foundation for the movement. The Black Consciousness movement has in the past been critiqued for not incorporating gender struggles within the movement. The #RhodesMustFall movement made it a point to incorporate gender, sexuality, and transgendered politics as they fall part of the emancipatory project of post-apartheid South Africa.

The psychological, emotional, and sexual violence that black women, gender non-conforming people, transgendered people are subjected to is from predominantly black men. And this needs to be addressed. The violence these groups of people are subjected to is because of the systemic patriarchal order in this country that black men are part of and need to be part of its undoing. And so it is critical then that a movement created for the dismantling of white supremacist patriarchy embodied by the Cecil John Rhodes statue must include the dismantling of black patriarchy.

Addressing the issue of black patriarchy remains an issue as some black males within the #RhodesMustFall movement remain stubborn about their conservative views about gender, sexuality, and transgendered issues. There is hope because many are willing to learn and strong black feminists and gender non-conforming LGBTI people challenge these black men.

The adoption of intersectional politics in the #RhodesMustFall movement was a genius move because intersectionality is immensely beneficial in understanding the multi-layered South African context where race, class, gender, disability, and sexual identity intersect with complex results. The very lives of black students at UCT are an example of the complexity of intersectional identities in South Africa because black students come from different class backgrounds, have different sexualities, and have different gender identities and all of these must be navigated in this often hostile white environment.

For me the #RhodesMustFall movement represents the hope for the future. A future where black students see themselves in the architecture of the universities they study in. Perhaps this is a sign of how future South Africa movements will look like, that they will recognize how struggles are connected. It is in the recognising the different ways that we as black people, as poor people, as LGBTI people, as women, as disabled people, are all chained by systems of oppression. This recognition then becomes the impetus for us to come together and dismantle the systems that oppress us.