In this quote Weston captures the intersection of social and identity struggles and how these struggles pull and push on each other. The intersection of struggles is no more evident than in the South African LGBTIQ community, where race, class, gender and sexuality intersect and produce a complex set of relations between people.

During Cape Town Pride this year, 2015, there were two schedules that were put out. There was the official Pride that was organised by the Cape Town Pride organisation. There was also an Alternative Pride schedule that was organised by members of LGBTIQ community in Cape Town who felt unrepresented and ignored by the official Pride organisers. Leading up to Pride there were numerous meetings that were held with the organisers of Cape Town Pride but these meeting never yielded any agreements about the events on the Pride schedule. Cape Town based LGBTIQ activists, NGO organisations and other individuals requested an inclusive Pride, where all within the LGBTIQ community can be represented in Pride events. The efforts to create a more inclusive Pride fell on deaf ears. The Alternative Pride schedule was created because of a lack of diversity and a lack of consideration for marginalised LGBTIQ people within the Cape Town LGBTIQ community.

I attended one of the official Cape Town Pride meetings after they had sent out an e-mail requesting volunteers. The meeting was help at 6 Spin Street in the Cape Town city centre. The organisers of Cape Town Pride chaired the meeting and they solicited ideas about pride events, but rejected most of the ideas because of “budgets” constraints. We were then asked to sign up for volunteer hours to help with Pride but then never heard from the organisers again. During the meeting, it sounded like the Pride was already fixed and that there was no real input needed, even volunteers weren’t seriously wanted. It felt like a smoke and mirrors exercise, not really geared at engaging the people, and I didn’t appreciate the waste of my time. 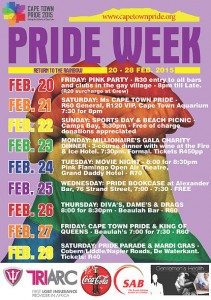 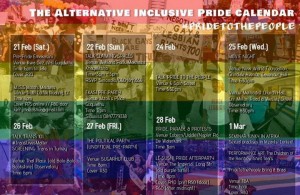 The Pride Parade is usually one of the last events on the pride calendar and this year was no exception. The LGBTIQ activists, NGO’s, and individuals who were opposed to the way that Cape Town Pride is organised planned a protest. The details of the pride protest were ironed out at the “Talk Pride To The People” event that was part of the Alternative Pride Schedule. In this meeting activists spoke of the non-accommodating and non-inclusive stance taken by Cape Town Pride organisers. The activists also spoke about how there shouldn’t be just a “stay away” from Pride, that it must be protested, people must show up, and reject the bullying tendencies of the Pride organisers.

The protest took take place during the Pride parade. The protesters consisted of people from different NGO’s in Cape Town, individuals, and LGBTIQ activists. There was so much solidarity during the protest amongst protesters from different LGBTIQ communities fighting for inclusion. The Pride protest was filled with songs, the beating of African drums, and chanting, calling for the recognition of black, of poor, of disabled, of transgendered, and of sex worker LGBTIQ struggles. Cape Town Pride organisers seem to lack an understanding of the way struggles are connected. There’s a refusal to comprehend that organising Pride in a socially and economically divided city like Cape Town, you have to consider how the events accommodate people who are not middle class, who are not men, who are not white, and who don’t live in the Cape Town city centre.

“Pride is a celebration” is one of the arguments used by Pride organisers for the lack of politics in South African Pride parades. How Pride events situated in South Africa can be devoid of politics is mind-boggling. Many LGBTIQ South Africans are still fighting for the right to exist. Many black gender non-conforming LGBTIQ are targets of violent assaults and murder. Transgendered individuals are fighting for access to social services, access to health services, and the creation of laws that allow people to live their lives in their preferred sex and gender identities. Not to mention the everyday bullying, and taunts, and the indignities that LGBTIQ people struggle against because of institutionalised homophobia in this country. Under these conditions how do we embrace Pride parades that are devoid of politics? Under these circumstances how can LGBTIQ communities be asked to only “celebrate” Pride?

It is clear that the Pride protests in South Africa target the depoliticization and subsequent commercialisation of Pride, and the resulting exclusion of certain groups of people. This is not unique to Cape Town; Johannesburg has had its fair share of Pride protests. Both Cape Town and Johannesburg Pride events have been mired in complex politics of representation. Although there had been a number of protests during Johannesburg Pride in the past, it was the disruption of Pride by the One in Nine Campaign protesters in October 2012 that really placed a spotlight on the problems with Pride in Johannesburg. The disruption of Joburg Pride in 2012 started a conversation within the LGBTI community about the politics of pride and the meaning of pride in the context of South Africa. This is an on going conversation and it remains a touchy subject because the issues that caused division have not been solved, chief amongst them the representation of “black” struggles within Pride.

You might be wondering what exactly are LGBTIQ NGO’s, activists and individuals demanding from Cape Town Pride? What would an inclusive Pride look like? If Cape Town Pride is going to be inclusive it will have to consider the following points very seriously: